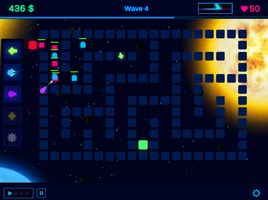 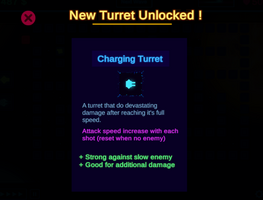 I was planning on making multiples levels of 10 - 15 waves but I feels like the only thing that made the game better was having more turrets to try, but it wasn't really worth for me to spend more time on this project, I have already spent ~200 hours on this project (I throw away half of the work (a level editor, a save systems...)).

I added a black shader over the background to make it less distracting.

I was bored around the wave 50 since the player supposedly have all the upgrades, so I cut the total wave number from 100 to 50, better keep the game shorter than leaving the player with a feeling of being bored with the game

I worked on this project "only" for the past two month but yeah this is the first game I have published in 3 years :p

Use all the kinds of turrets and weapons to defend your base. Can you last until the end of the 50th wave?